The Mini Big Band at The RAF Museum, London.

We’ve been to some amazing venues this week and played some great shows. Here’s some photos from our event for the RAF chaps at The RAF museum in London for the 100 year celebrations of the RAF. This has to be one of the most Incredible venue’s we’ve been in!  Theres definitely a wow factor when your table is under the wing of a B52 bomber. 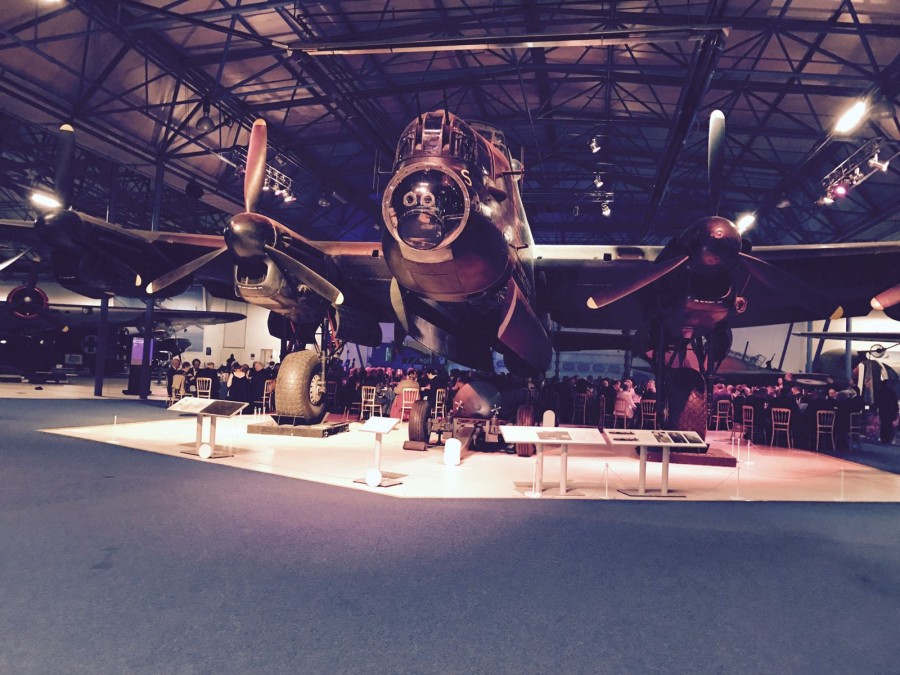 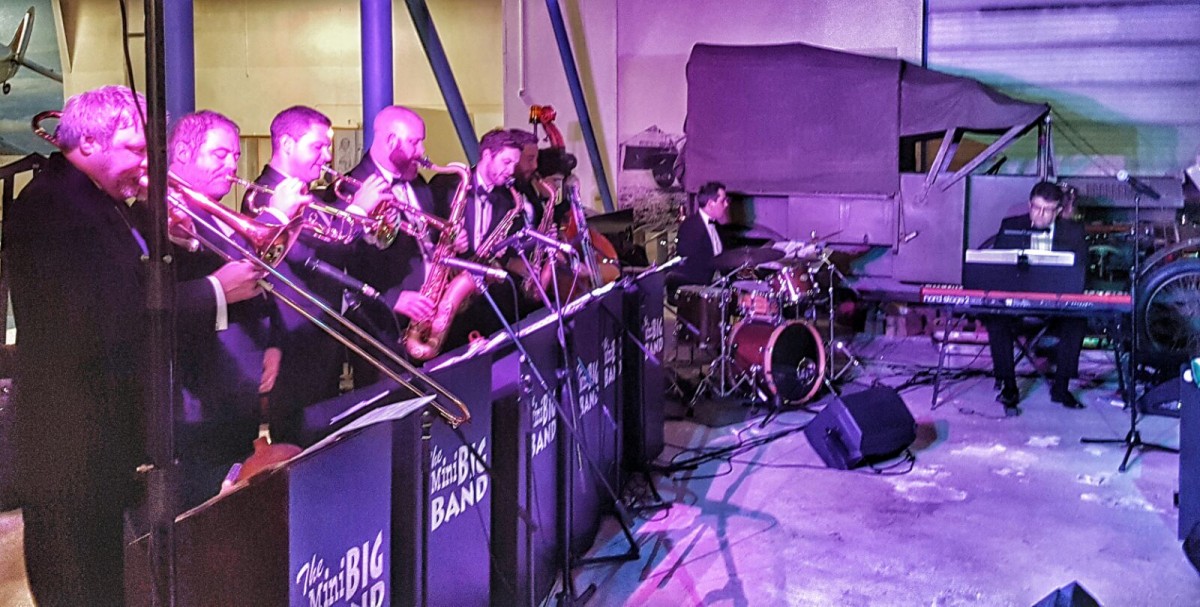 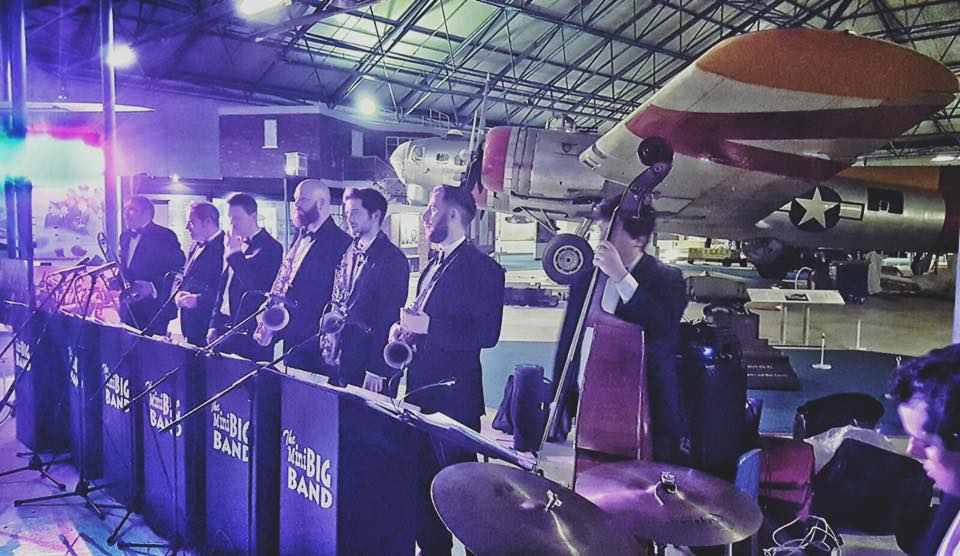 We had a great time playing at the Holiday Inn Ballroom in Birmingham where we were able to play our fantastic award Stings/Play ons for the companies award ceremony.  These really do help to liven up and give a touch of Glamour to any awards ceremony.

There’s also a great shot of the professional sound and lights that we use on every event, which enabled us to provide the full event sound for this, including microphones for the presenters and audio for presentations. 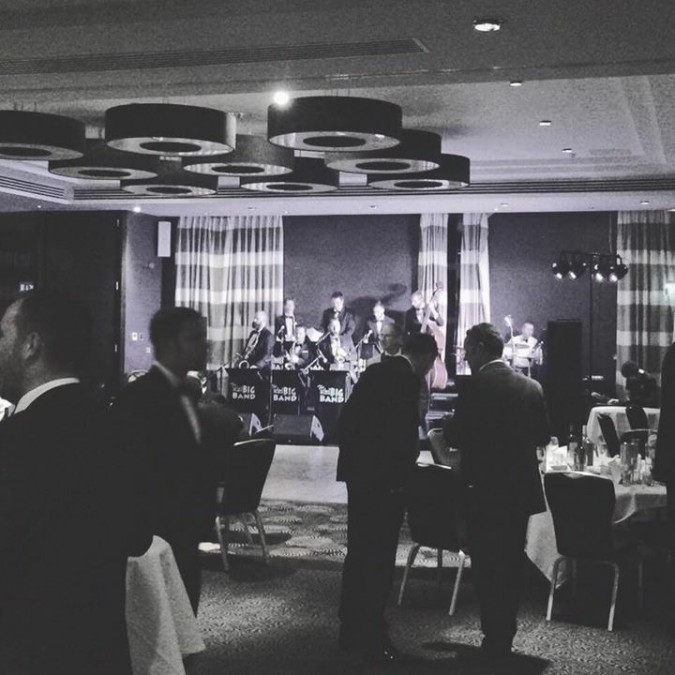 Here’s a couple of photos from a recent event at Broughton Hall in Skipton.  The guests had the wedding day in the traditional Hall and then danced their way up to Utopia (lead by The Mini Big Band horns), the modern glass event hall to party the night away. 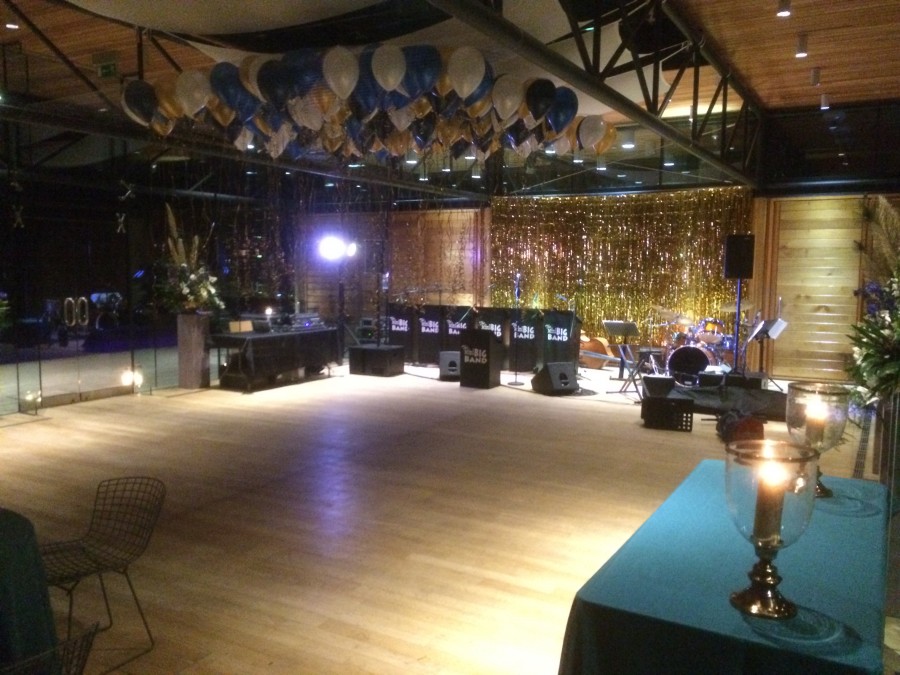 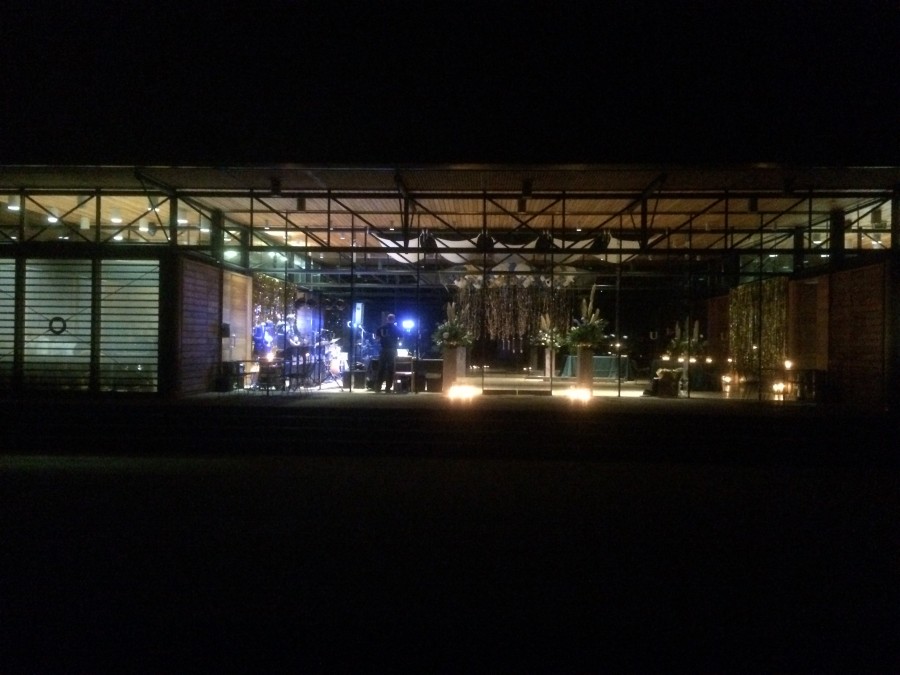 We and all the guest where absolutely blown away by your performance at the wedding.  We loved every minute of it.
Everything was brilliant and you guys created a fantastic atmosphere.
Posted in Testimonials

Posted on October 6, 2016 by Chris Hibbard
We were absolutely delighted to have booked the mini big band to play at our wedding reception. The standard was exceptional and the band had provided an extensive repertoire from which we were able to highlight our favoured songs. The band also had recordings of some numbers on sound cloud so that we could learn a first dance to the exact arrangement that they were to play on the night. It couldn’t have been easier – in the end we chose to charleston to “I want to be like you” which was fun and went down extremely well. I liaised with Chris mainly via email, but chatted on the phone nearer to the day so that arrangements could be finalised, nothing was too much trouble and the band was a real highlight. The keyboard player was booked earlier to play the piano during the meal and their set up was efficient.
The band had travelled from Yorkshire to London to play and they might be making the journey down the A1 more frequently as several guests at the wedding have been asking for their contact details, and all thank you letters have commented on their stunning performance, the dance floor was filled all night.
Chris – thank you for a stand out performance.
Christian and Mark
Posted in Testimonials

The Mini Big Band in Russia. 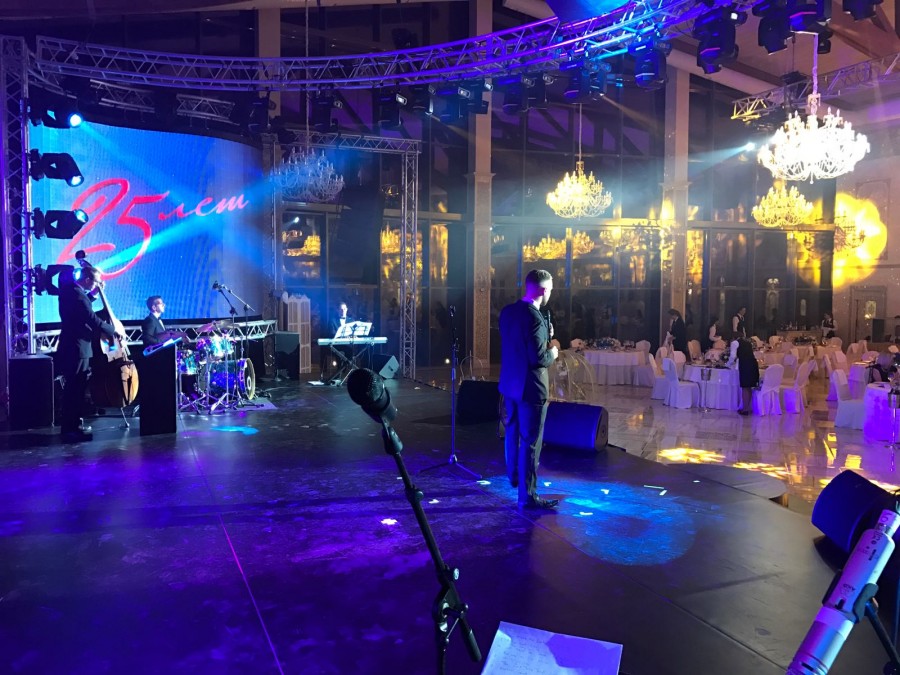 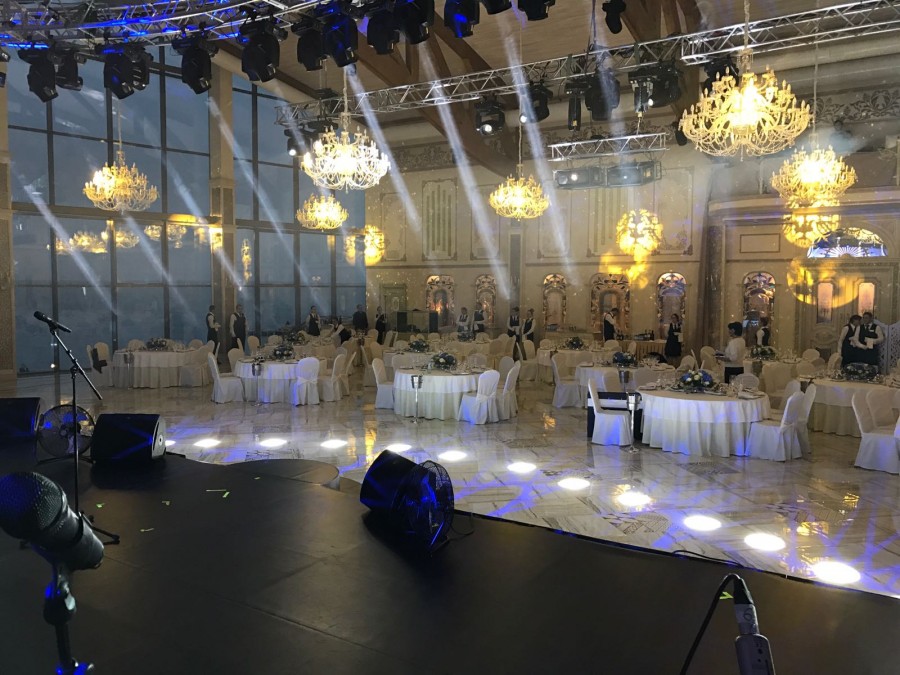 Here’s a couple of pictures from our recent trip to Chelyabinsk, Russia for some fantastic gigs on beautiful stages.  It was quite a journey but amazing to play on such great stages and for our amazing hosts and clients.  We’re looking forward to coming out and seeing you all again soon. 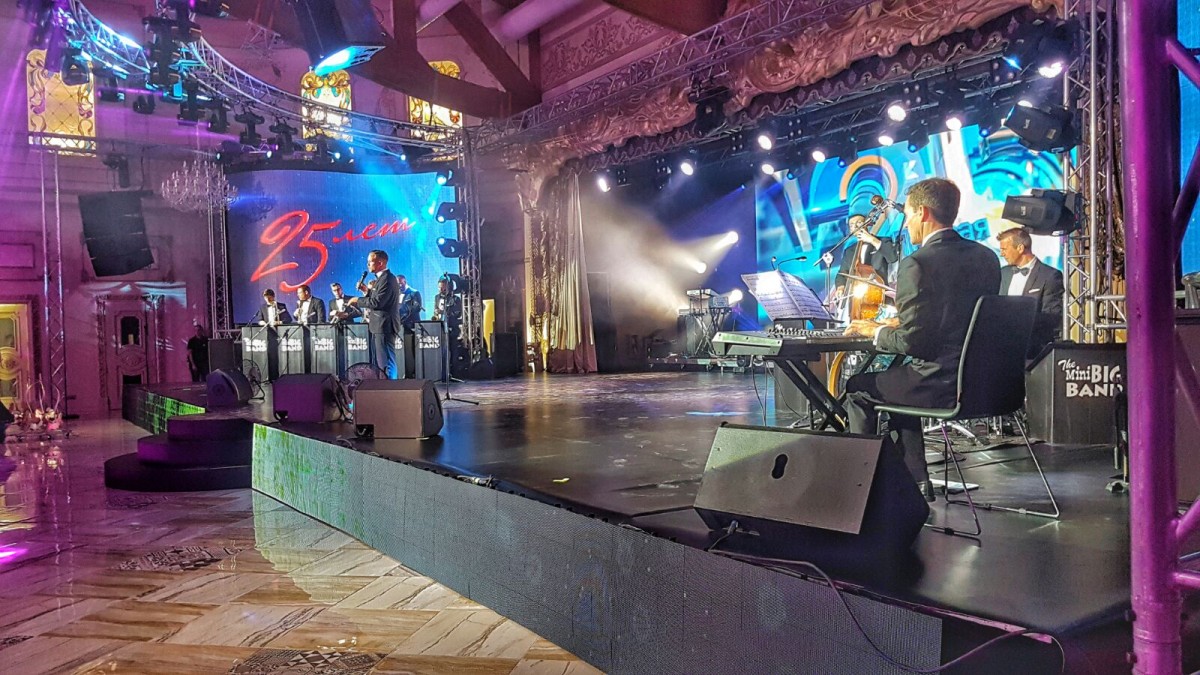 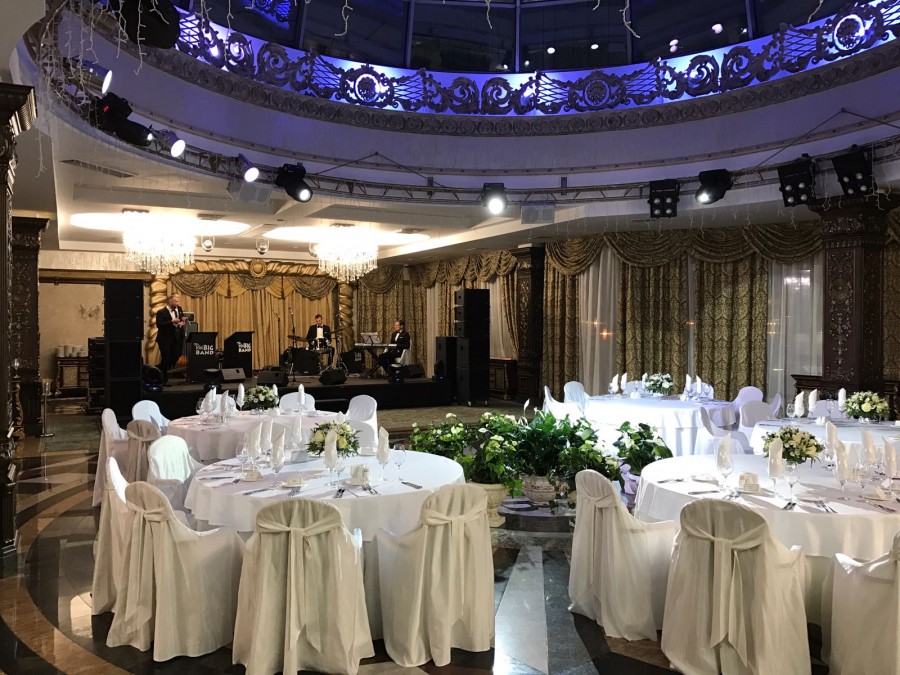